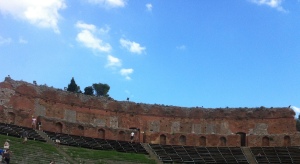 I am currently in beautiful Giardini Naxos on Sicily for the 9th Pan-European conference on international affairs, where I am presenting this afternoon on measuring effectiveness in counter-terrorism. The presentation draws on my work on EU counter-terrorism, including the edited collection The Impact, Legitimacy and Effectiveness of EU Counter-Terrorism that came out with Routledge earlier this year. The (very plain) power point that I will use is here, but the key points of the presentation are outlined below.

The first important thing to think about is what we mean by effectiveness when considering counter-terrorism. In very simple terms, we might say that effectiveness is simply the having of an effect, i.e. a measure is effective if it changes the status quo ante in some appreciable way. However, that simple conception is clearly insufficient. In technocratic and political terms, effectiveness is often thought of in terms of the measure/policy/practice in question having had the desired effects. Even that, however, can be overly simplistic. While the desired effects may be quite specific (e.g. ‘to disrupt the flow of finances through financial institutions to terrorist organisations) there is always a host of often unarticulated ‘meta-objectives’ that need to be taken into account for any assessment of effectiveness to be adequate. These are not only operational (i.e. ‘does it “work”’? (whatever that might mean)), but also relate to societal, legal and democratic matters.

In societal terms, we can think about meta-objectives of, for example, maintaining societal cohesion, enhancing or maintaining allegiance to the relevant polity, not having negative implications for societal security, being ethical, being formed and implemented ‘with’ society and so on. These are all, in essence, matters that go to who we are as a society: to what kind of ‘balance’ between security and risk, cohesion and belonging we want to strike in order to maintain a sense of ourselves as a polity. These connect with democratic and legal effects and meta-objectives. Democratic matters of relevance include authorship and authority, as well as input and outcome legitimacy. Does the formation and enforcement of counter-terrorism comply with our reasonable expectations of a democratic policy? Does it respect our identity as a demos? Does it work, i.e. does it pay off the democratic costs that are associated with it? Matters of relevance from a legal perspective are relatively doctrinal in some ways: how does the measure in question impact on other, pre-existing legal arrangements and standards? What are its second order effects, for example if Measure X reverses the burden of proof for suspected terrorists in relation to Offence Y, what implications might it have for the canonical principle that the burden of proof lies on the state in a more general sense?

It is clear from this, that in order to measure effectiveness in a way that would be considered adequate from all of these perspectives—or, to put it another way, in a textured manner—a complex scheme would need to be designed and implemented. To be sure, this would be difficult, expensive, and time consuming. However, that does not mean that it would not be worthwhile.

My argument is that this kind of textured, multi-part effectiveness review has significant payoffs for security and for the maintenance of constitutionalism in the state. First, the effectiveness of review of one measure can inform the ex ante processes relevant to another measure. Where there is time for a formal ex ante impact assessment (which is not always the case, at EU or national level) the results could be formally ‘fed in’, but it would be helpful even where such an assessment does not take place. This is because the multiple, sometimes unanticipated and often unintended or counter-productive effects of previous measures might be used to inform debates and mediate political and politicized commitments to do something, particularly in periods of panic-related responsiveness proximate to instances of ‘security failure’. This further enhances governance objectives related to evidence-based law and policy making that too often fall by the wayside in the counter-terrorism context.

Furthermore, an adequate effectiveness review should—or could—produce information and knowledge that breaks through the information monopolies enjoyed by security actors in the context of counter-terrorism so that technocratic assessments of ‘effectiveness’ can be combined with political and societal assessments. The benefit of this is that ‘society’ and politics have the opportunity to radically assess the necessity claims that underpin demands for further legal and policy counter-terrorism measures on the parts of norm entrepreneurs in this field. It may be that, in appreciating the full range of negative and positive effects of counter-terrorism measures, ‘the polity’ (rather than the government) demands that a different ‘balance’ is struck, or rejects proposed measures because of a conviction that the multiple costs associated with it are too great. In close proximity to an attack this seems unlikely, but it is not beyond the realm of possibility in a broader sense. After all, the ‘tradeoff thesis’ upon which so many claims of appropriateness, necessity and justification are based is in many ways a technology of the unknown and the allegedly un-knowable. If effectiveness review could expand the realm of the known and the knowable more robust justifications may have to be offered for the introduction and maintenance of measures, the effectiveness of which is largely unknown.

This stands in sharp contrast to the status quo in which, when we measure effectiveness at all (and we often don’t), we often conflate implementation and compliance by state and non-state authorities with ‘effectiveness’, consider ‘proportionality’ in legal terms to be sufficient in terms of effectiveness, and omit to consider many second order effects on society and core democratic principles. Whether it is achievable is, of course, quite another question…

4 thoughts on “Measuring the Effectiveness of Counter-Terrorism”